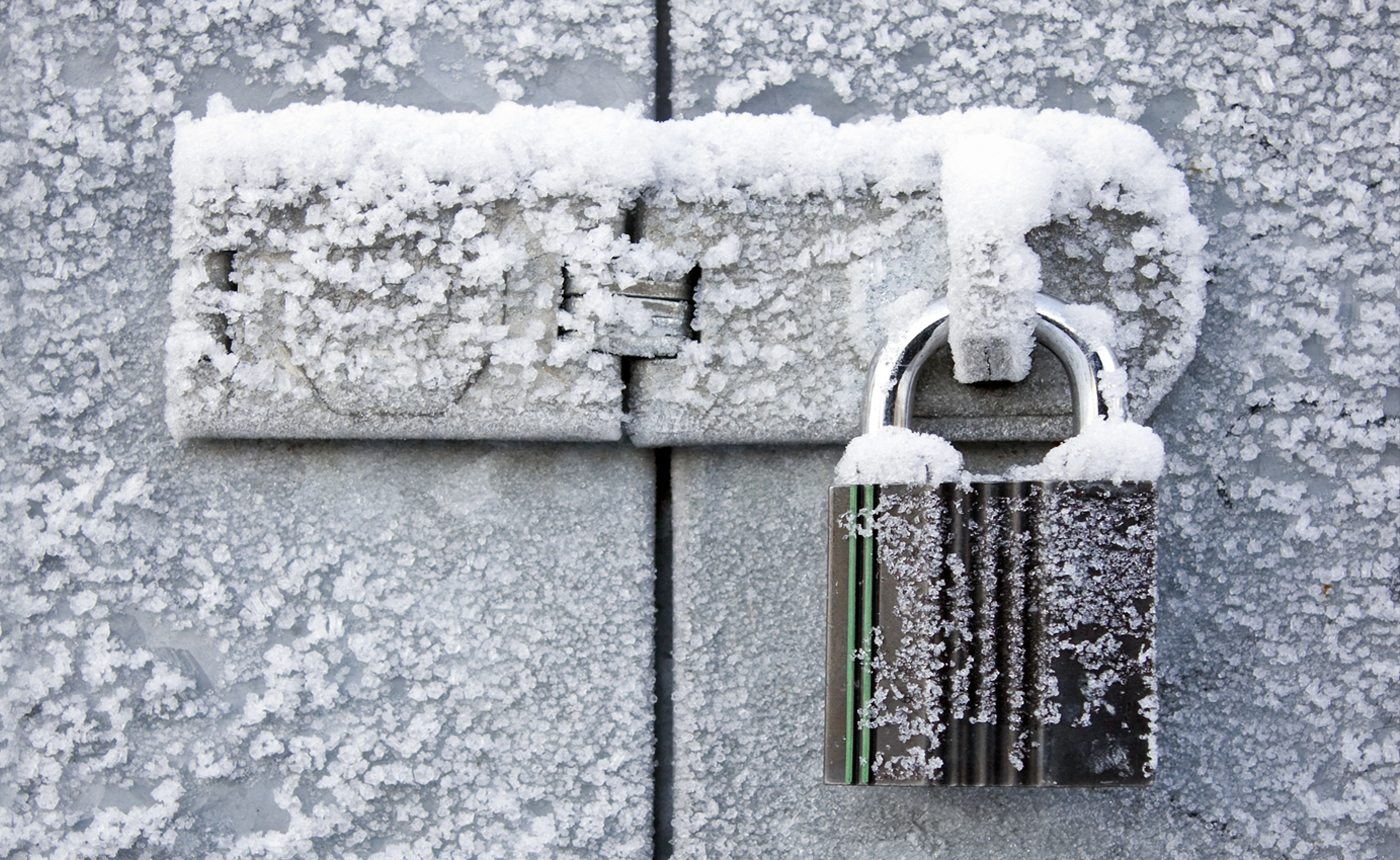 Will the forecast snow and plunging temperatures still catch retailers out?

And that can mean only one thing… An excited six year old!

As a third party security provider, moving thousands of people around the country to meet the needs of our retailer customer base is challenging at the best of times. Add snow and ice and that job gets harder. Let’s hope for a thaw by tomorrow. For now, it is off to the park…

My loopy Labrador, Leo, is slower than usual. Normally he would be tearing around. However, regular readers will remember that he was unfortunately the victim of someone else’s carelessness last week and managed to pounce on a broken bottle that someone had kindly left on the beach. The resulting stitches have to stay in for another week.

To stop him pulling his stitches out, we have him wearing a sort of doggy T shirt that stretches over his upper torso and down over his front legs, one of which bears the scars of the recent incident. He looks like a dog in a muscle vest. Is that a swagger I detect in his walk, as we pass some other dogs, or just the limp from his injuries!

I let him off the lead and slightly subdued he stumbles gamefully across the park, no doubt looking for fox droppings to roll in. Joy! My daughter runs after him.

With strict instructions not to pick up any “yellow snow,” she sets about making and throwing snowballs for Leo to chase after. Poor old Leo can’t quite work out where these “vanish” to every time they hit the ground. Over and over again he tracks the ball through the air, but when he arrives where it has landed all he finds is snow. And that happens even though there is a mark where the ball landed. It is a mystery!

Then my daughter turns her attention to making a snowman and I start to think about the implications of a frozen wonderland for Amberstone’s clients and the sort of challenges that we will be dealing with today. Perhaps I should call the office…

I think retail staff are hacked off. Given the potential threat to their health and well-being from Covid, as well as the increased number of verbal and physical attacks on retail staff, many are demoralised. I can imagine many would look outside at the cold wintery conditions, see that their usual route into work is going to be more difficult than usual and conclude that they would rather not go to work today.

Staff shortages have been made worse by the need for staff to self-isolate. In the past this has possibly created unnecessary staff shortages in the quest to protect against the spread of Covid. With as few as 5% of staff testing positive after being told to self-isolate after a Covid contact, it is easy to see how workforces have been decimated by this almost indiscriminate isolation policy.

So it is terrific news that the Government is extending the offer of lateral flow testing to businesses with more than 50 employees. Originally lateral flow tests were the subject of bad PR because they were not as accurate as PCR tests. However, used strategically they are very effective and perhaps what they lack in accuracy they more than make up for in terms of speed and freeing people up from what turns out to be unnecessary confinement. I read that almost 650,000 lateral flow tests are being taken every day now. In practice this should dramatically reduce the number of people out of businesses and release the pressure on teams generally.

Currently there are a significant number of stores across the UK that are closed and unmanned. Almost inevitably there will be alarms triggered at some of these stores, meaning that a local manager will need to be despatched in order to check the site. Unfortunately, things are likely to be tricky.

First of all, you have to find a manager! Many retailers have staff furloughed and that includes staff that in normal times are keyholders for the store. Because they are on furlough, they are not answering work emails or texts. So, our emergency contacts suddenly become uncontactable.

Then there is the issues of keys. I know it sounds like this would never happen, but it does… frequently. As people have been furloughed or left a business their store keys are handed in. Then with lockdown many store managers are themselves furloughed and as part of that process hand their keys back to estates management, so that keys are available should a store need to be accessed. The problem is that none of these sets of keys is labelled. We have had incidents of an alarm going off in a store and being pointed to a box of around 200 keys that have been collected from 30 or more stores and none of which are labelled. No key. No manager. Nightmare!

And then there is the issue of the cold weather and stock.

During frosty periods heating systems are designed to come on and prevent a store getting so cold that the water pipes freeze and burst. However, this is not always the case. And any burst pipe situation is going to be made much, much worse by the levels of stock being held – especially in fashion. With hardly any time to move winter stock and with spring just around the corner, fashion retailers have record levels of stock on hand to deal with.

Some retailers we know of have simply used their closed stores as overflow stock warehouses. Stock has been rammed into every nook and cranny of the store to be held until they can reopen. The idea being that when they actually know what they are dealing with in terms of a reopening, then they can worry about how to shift it all then. In one case the store was so full of stock that we could not actually get in to answer an emergency, because our entry/exit point was blocked with product!

Now imagine a store like that with a burst water pipe. The damage is going to be extensive. It will take weeks to clear up. And if there is no alarm system monitoring such a condition and nobody at the store day after day, week after week, then it is easy to see how a burst pipe could become a major incident. And not just for that retail outlet but, depending upon its location, adjacent retailers too. But it is all insured right? Well maybe not.

Insurers require premises to be kept at a temperature above which frost can cause damage. Many specify a minimum temperature to be maintained or exceeded at all times. Now think about it. Did you make sure that the heating would come on in the event of a cold snap when you locked up at Christmas. Or did you do as most retailers do and turn everything off. And of you did, were all the water systems emptied so that there was no chance of freezing/bursting pipes? Hmm…

Now might be a very good time to get all of your stores inspected and to make sure that you are within the terms of your tenancy and insurance moving forward! Otherwise, you could find yourself with a very large clear-up bill indeed and for something that your insurers will not pay out for. And talking of insurance, let’s consider slips, trips and falls.

During the pandemic we have become accustomed to getting people to queue outside a store. But remember that the basic rule is that if you create the queue then you own it, even if it is not on your property. As a result, you acquire a duty of care for the people in that queue. So, the key consideration is have you made sure that the surface people are standing on is free from ice and has grip?

Apart from being entitled to expect you to organise a socially distanced queue and provide a Covid safe shopping environment, customers can also expect you to have made certain that they will not be exposed to danger whilst queuing. That would be a slip on an icy surface where you directed them to queue before accessing the store. As I say, that is true even if you do not own or rent the piece of thoroughfare that the customers are queuing on.

On second thoughts, I’m not calling the office!