“Whoever wishes to foresee the future must consult the past…”Machiavelli 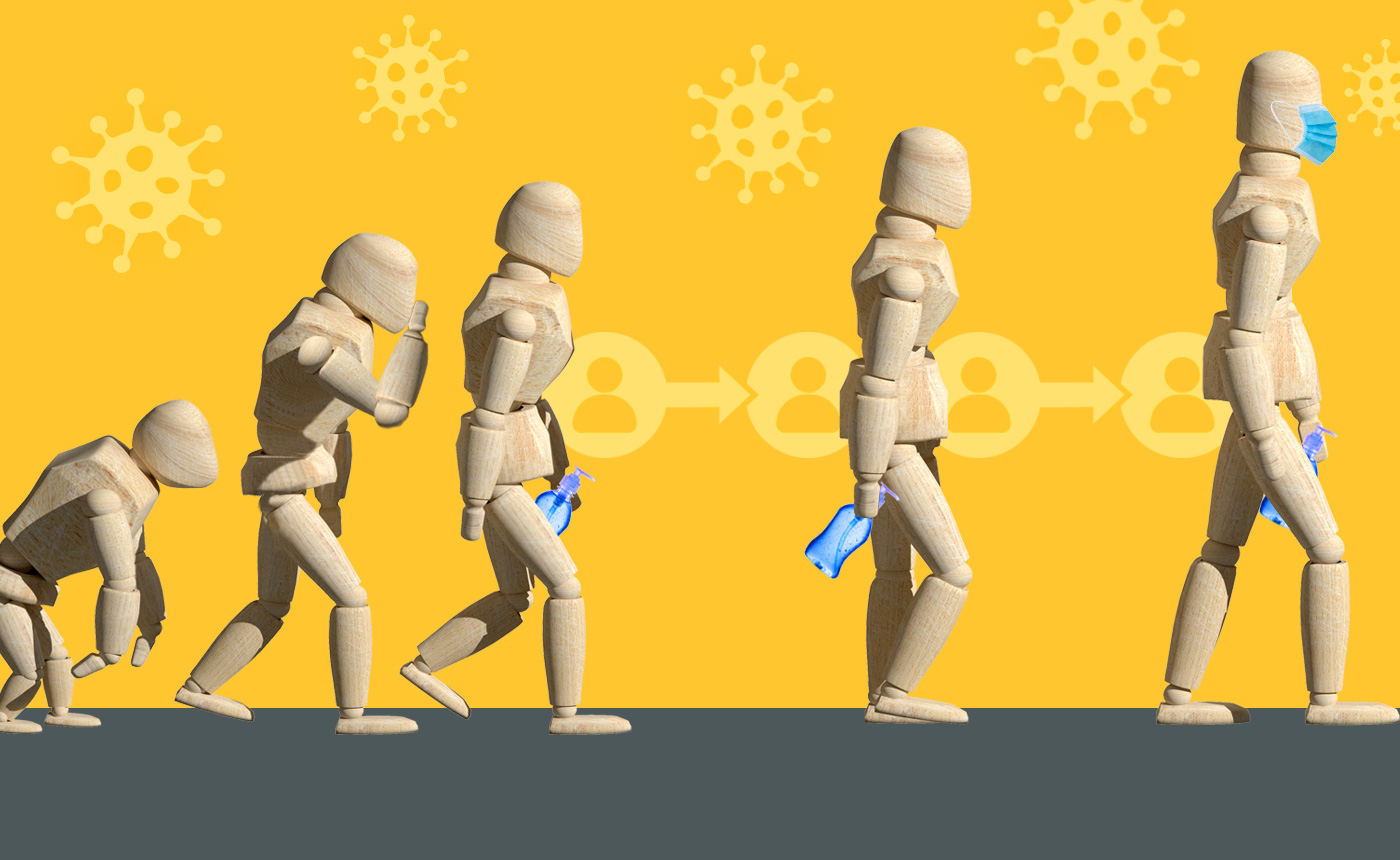 What can recent events tell us about the best way to meet the future challenges of lockdown?

Across “the Pond” extraordinary events have been taking place.

Five people are killed, including a police officer who was “executed” by protesters.

The American President has been impeached for the second time and faces a trial after leaving office, as his presidency ends in just a few days.

Commentators say this is a desperate time for democracy and that lessons must be learned. However, I feel that these events also demonstrate a need in retail to carefully consider how we will act during lockdown, what intelligence we base those decisions upon, and about how well prepared we really are to implement those decisions.

My six year old came into my office yesterday desperate to tell me a joke that one of her classmates had told her. It was this…

Question: “What do you call a magic dog?”

As it happens our family pet is a clumsy Labrador named Leo. During lockdown Leo has been operating in more restricted space than usual due to the number of people at home all day. What is in equal measure both hilarious and frustrating is his apparent lack of awareness of the destruction caused by his thumping tail.

As Leo gets excited (usually incited by cries of “walkies”) his tail starts to thwack back and forth sending houseplants, ornaments, shopping and pretty much anything else (including my aforementioned daughter!) flying.

One good “thwack” of his tail and even the most unlikely things can be batted right across the room. And every time it happens, Leo sort of “stumbles,” looks around and seems surprised. I swear that his expression is one of “how did that happen,” and if he could talk he would be protesting “that was ME!?! And he does this every time, even though these things happen with monotonous regularity and total predictability.

Is Leo the only one who keeps being surprised by the results of his actions?

I am not making a political point here. The politics of the USA are the business of the American people. However, I do think that the recent events have led to consequences as predictable as one of Leo’s tail-thwacking episodes!

Given the devotion accorded President Donald Trump by his supporters, viewed from afar it was to me at least highly likely, if not absolutely obvious, that this was going to end in tears.

When you tell your followers to “fight like hell” to avoid giving up the elections, blue collar, right wing Americans with guns on their hips are not going to just meekly sign a petition in protest and present it to their local Congressman.

If you give a green light to certain behaviour through your actions, does it not follow that people will behave as they think they have been told they can? What does this have to do with our retail industry. Well everything…

Before Christmas the Government legislated to make it compulsory for people to wear face masks in public places. Before the ink was dry on the legislation the Police announced that they did not have the resources to enforce this legislation. Retailers protested that neither did they. And what has been the result? More and more people are not wearing face masks when they do their essential shopping.

Further collateral damage to the Government’s strategy has also been done through this slipping of standards. If nobody is going to enforce the face mask law, then people become lax about social distancing. And when social distancing is not a priority and your kids are at home because the schools are shut, you may as well take your kids shopping with you. And there it is, families all shopping together and less people wearing face masks.

As a result, this week the Government has felt compelled to launch a campaign reiterating that people must wear face masks, shop alone whenever possible and keep to social distancing requirements. As soon as the announcement was made, Cressida Dick herself made an announcement that, where people were flouting the lockdown rules, there was an increasing likelihood that the rule breakers would be fined. Almost immediately the big essential retailers came out to say that they would be denying customers entry to their stores if they were not wearing masks. Terrific! Everyone acting in unison and all maintaining the official line.

Except unfortunately the genie is out of the bottle…

President Trump is now unable to control the rabble that made the assault on the White House. Americans fear that the inauguration ceremonies could be the target of armed mobs of Trump supporters looking for trouble.

The security being deployed is massive. And the reason people are scared is because, even though the President has appealed for non-violent protest and some 160 protestors are facing prosecution, the vast majority of supporters will simply carry on without taking heed of the President’s appeal for peace, believing they have moral justification to do it – a cause celebre.

In just the same way there is open discussion in retail about the inability of the authorities to enforce any of these lockdown restrictions. Repeatedly we are told that the Government is concerned that if they introduce tougher laws then they will be ignored. People figure that just a few weeks ago the police did not have the manpower to get involved. So, what has really changed.

And that brings me to my second point

A dog walks into a Job Centre. ‘Wow, a talking dog,’ says the clerk. ‘With your talent I’m sure we can find you a gig in the circus.’ ‘The circus?’ says the dog. ‘What does a circus want with a plumber?

The Capitol was ransacked. Elected officials were running for cover escorted by security. The crowd ran amuck. Contrast this with our parliament buildings at Westminster.

Think back to the hunting lobby and how those demonstrations that were repelled from the parliament buildings, as others have been. True a handful of individual attacks have resulted in incidents, including the injury and even murder of brave individuals sworn to protect the institutions. However, the building has never been stormed in the way we saw events unfold in Washington.

Clearly the US has all the resources it could need, both in terms of physical security and intelligence. However, unlike the Brits, the US had not used that intelligence.

For three weeks they had been aware of the intentions of the protestors to travel to the Capitol. And two weeks before they had information that a storming of the White House would be a distinct possibility. However, they did not act upon that intelligence. As a result the authorities were made to look foolish. They were inadequately prepared.

The White House Security service were working on a false premise based upon erroneous assumptions and so open to attack. Just as our man in the Job Centre was first surprised by the presence of a dog, then that it talked and then that it aspired to being something other than a dog. How he addressed the situation was wrong at every point as were the officials responsible for White House security on that fateful day. And I worry that UK retail is in danger making similar mistakes…

There is a slew of organisations available to provide retail intelligence. And third party security providers, such as Amberstone, have so much historical data and real time information available that it allows our clients to make informed decisions on what is likely to happen and what to do in the event that it does.

So, we know that when locking down a store it is not just important to have an alarm system in place, but to have it armed. And then it may seem obvious, but when the alarm is tripped it is important to make sure that the person with the key who would usually respond is not on furlough and so not picking up company emails or phone calls.

And, as we heard happened to one retailer, make sure that you can identify which key you need to use to open the store in the event of an alarm to assess what the problem might be. In this case the 200 plus keys from a large number of stores had all been collected in one box, held in an offsite location, with no labels to indicate which keys were for which stores!

Use your retail intelligence to identify which stores are most likely at risk and deploy the correct resources to the sites that need the protection most. Turning up at the right place at the right time with the right tools and people for the job may sound obvious. However, in practice we know that retailers often struggle to do this because of a lack of real time data or planning.

Our Risk Management on Demand Service achieves significant savings for clients simply by using data to accurately allocate what resources are needed and no more. This eliminates inefficiencies, built in redundancy costs and effectively mitigates risk. At a time when businesses are in unchartered territory as stores, some open 24/7, are suddenly locked down, there is a need to look beyond normal operating procedures, collaborate with others who are or have been in similar positions or situations, and plan how to deal with the new challenges that we all hope will soon be gone and forever.

It seems that the role out of the vaccine is gathering pace. Our country has a glimmer of hope that by the summer there will be return to normality.

Until then we need to be careful about what impressions we give the public regarding what is appropriate in our stores. And we need to double down on intelligence and experience to make sure that, unlike the officials who have resigned following the troubles on Capitol Hill, we not only have the tools to deal with risk but also a correct plan for how to use them.